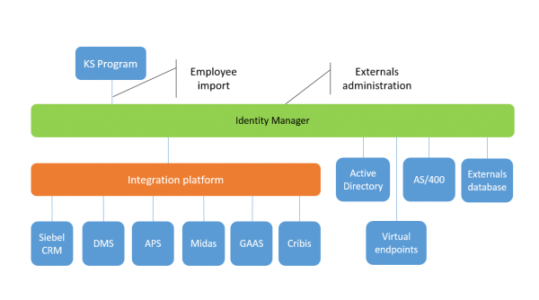 During 2016, we expanded the number of systems connected to IdM via the integration platform by two more applications: multiChannel/GAAS and Cribis. At the same time, we implemented several enhancements and minor extensions according to customer requirements.

The following operations have been enabled for managing users and their permissions in MultiChannel/GAAS: creating, modifying, validating and invalidating users and reading user/user details. Connection was done by default via the integration platform. No password management was implemented for this application, SSO was used for login.

The Cribis application was also connected to IdM via the integration platform using EntUser. In addition to the standard operations with user accounts (creation, modification,…), a service for deleting a user (due to the licensing of accounts on the end system) was implemented, as well as the possibility to change the password, including setting rules on password complexity.

Besides connecting the two new systems, we also worked on upgrading IdM to a newer version along with upgrading Java and Jboss. Last but not least, outside of standard service tasks, we have been involved in minor development and modification of already implemented processes to meet the client’s needs. These included: