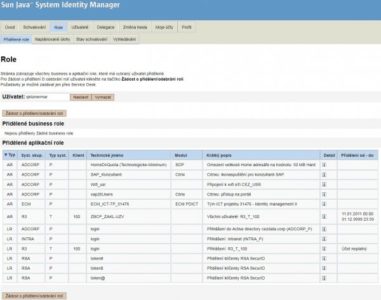 A secondary objective, but internally important, which brings new opportunities for implementation at CEZ Group, was the Proof of Concept of central SSH key management for Unix OS.

The project started at the end of last year (11/2010) with a new project manager (PM) on the ČEZ ICT Services side. His familiarization with the project and the Christmas holidays brought delays to the project right at the beginning. However, the new CEZ PM proved to be very beneficial in the continuation of the project. After the initial analysis and the approved Target Concept, the implementation of Phases 4, 5 and 6 started and ended with Release 12 in June this year.

Stage 4 and 5 were designed as a fix-price and were successfully and fully completed. Stage 6 was completed as a T&M (drawdown) and was cut short by the customer by approximately 40 MDs due to lack of funding.

On the customer side, the project team, apart from the new PM, included mostly traditional members (among others, security methodologist, IDM administrator, infrastructure administrator, SD operator and user management) and new members of the SAP security and base.

From the AMI project team, Martin Lízner traditionally covered the technical side of the project, but all senior IDMs Jiří Vitinger and Petr Čvančar also joined.

The following parts were added to the existing IdM application in the CEZ Group:

The project also included preparation for the subsequent replacement of Access Manager and the SPNEGO library was tested on a demo application, which will provide Single Sign On to IdM. As part of the testing, the concept of this authentication in IdM was also devised. Testing was performed on real CEZ operations (browsers and OS).

Another independent part was Proof of Concept for central SSH key management for access to UNIX systems. The essence of the solution was to centrally maintain and guard SSH keys (private and public part) for accesses to Unix OS, to control key generation and thus reset a certain strength of pass phrase (diceware used), to allow users to share SSH keys across connections to individual servers, to allow distribution of SSH keys (public part) to servers, to securely guard and not share SSH keys (private part). This allows the user to log on to the Unix OS after a single login with a passphrase SSH key. This key cannot be removed from the client and is not stored on disk – so it cannot be stolen or misused. The KDC then takes care of distributing the public portions of the SSH keys to the target servers and also takes care of their expiration. This whole process should be target controlled from the IDM by having the KDC connected to the IDM and accesses to individual servers handled by application roles.

The proof of concept addressed the following points: