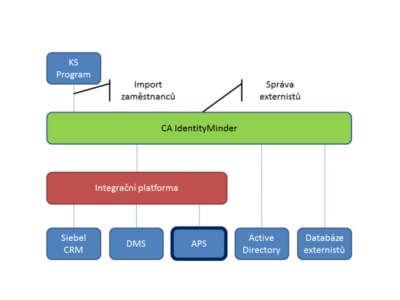 At the beginning of 2014, several modifications to CA IdentityMinder (hereinafter referred to as IdM) for Raiffeisenbank a.s. were completed and deployed. First of all, this involved connecting a new APS application from Unicorn.

Therefore, even in this application, accounts are now centrally managed and client employees are automatically created, modified and cancelled in APS according to information from the HR system. The connection was again made via a single integration platform (Enterprise Service Bus) as required by the bank’s IT standards. In connection with the APS connection, the original concept of roles in IdM was supplemented with a new element that now multiple role types can exist for one connected application and these roles have programmatically defined links between them. E.g. if a user does not have a role of type X, they must not request a role of type Y, etc. All other issues such as role requests, importing role definitions from Excel, rules for automatic role assignment and removal, role management interfaces, user lifecycle management, etc. have remained unchanged as for existing applications. After all the necessary modifications were delivered, the actual connection of the APS application was already handled by trained staff on the bank side with only minimal support from our side.

Along with the APS connection, other minor useful features were implemented in IdM, of which we highlight the following: