Her eyes scanned the green-lit products. She ignored the others, she wouldn’t buy what was cheaper elsewhere. Finally, she picked up a jar.

Beep. “Your CO2 footprint for this week has been exceeded.” Damn, she was relieved, the self-propelled car must have made it back to the garage. She put the product back. So, what do I have left? she said half aloud to herself, examining the shelves through the HUD of her glasses, which began to suggestively throttle back one product after another. Finally, she took a can that was huddled in the back of the shelf. There they go again >>Beans from your favorite local farmer<<, she read in a mocking tone. She hated this green politics.

On her way to the register, she noticed the date in the notification area – 12/19/2035. Dad’s sixtieth birthday was in a week! She switched the mode of her glasses and the arrows brought her to the PC Games/Old Flicks section. Fallout 4 for 49 uB, that’s a steal – or rather, one coffee. Yeah, that would be good, she sighed. Glasses flashed and an arrow to the nearest drink machine appeared, accompanied by the information, “Coffee on an empty stomach doesn’t do you any good, Elis.” I know I know, she mumbled, and walked to the payment terminal. She flicked her wrist and waited for the cashier to confirm her biometrics before running out into the cold night.

The smart clothes turned on the heating, so she didn’t mind the light rain that drifted through the streets of old Prague. Elis slowed to a complete stop. She was taking in the atmosphere of the place and the events of the last few weeks were running through her head.

So what next, she thought. Upcoming personal events, weather forecasts and expected news began to scroll from the top of her head. Not now! Gesturing, she turned off her glasses and pocketed them. I need to sort this out with myself. Taking a deep breath, she started running down a side alley.

The window of the black car rolled down slowly. Two cool blue eyes watched the disappearing footprints on the wet pavement. “Identity 1337 has left sector 737.” 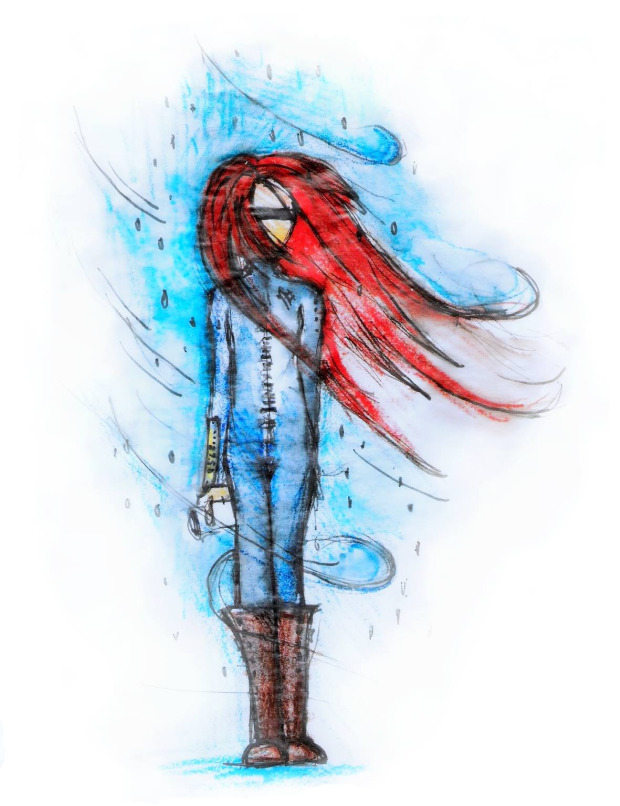 The residential area was quiet, as it was every Friday when everyone left town for the weekend. The lamp lights reliably bathed the streets in a yellowish glow. Still, few would have noticed the dark silhouette against the wall of one of the houses if it weren’t for the bluish glow that illuminated her face.

Elis’ eyes searched the list of wifi networks on the screen for a moment before a satisfied smile spread across her face. MM.FromMe2U – she knew she had found what she was looking for. She clicked on the name of the AP point and launched a dictionary attack.

She remembered a talk at the Security Prague conference titled “Network Security – Man is the Weakest Link”. In it, Alan Nowak had presented his experience as CyberShark’s chief information officer. She recalled again how he had arrogantly berated the competition for security flaws that had leaked out, and was appropriately smug in describing his own security – VPN access with triple factor, time and geolocation restricted access, agent DLP layer, chips under the skin for tracking movement… And the next day, an offer landed in her email that was not to be refused: 100 Bitcoins for a single file. And, of course, the imaginary mocking slap in Mr. Nowak’s face.

The glasses on her temple vibrated gently. The traffic tracking app registered a car on a side street. Elis tilted the screen just in time to remain undetected. She waited for the car to pass, then checked the status: the password-catcher reported success. Access to the wifi was free. Yeah, Elis thought, humans are the weakest link. Especially if that person is a family member.

To be continued in the second part.

Author: Petr Gašparík has been working for the last 7 years as a solution architect for identity management. He is in his 19th year at AMI Praha and has worked on a number of important IT projects for commercial and public administration customers such as ČEZ ICT Services, Česká pošta, and Unicredit Bank Czech Republic and Slovakia.